It’s always great to see a community placing a high priority on keeping its fire stations up to date. For Baton Rouge, Louisiana, a city that knows first-hand how important it is to be prepared, this fire station renovation has special meaning as the facility continues to build on a long legacy of offering exceptional response.

The project includes new high-speed, four-folding Slidetite 2.0™ exit doors which open twice as fast as conventional overhead doors. But speed wasn’t the only reason they were chosen for this application.

State Of The Art Door System for First Responders

The Fire Station #12 facility and the first responders who serve there in its downtown location have always been at the forefront of readiness. During the devastation of hurricane Katrina in 2005, the fire departments and other Baton Rouge public service units were pushed to new limits as the storm itself as well as thousands of fleeing New Orleans residents delivered an inbound punch that made it clear how important public safety can be. This station was home to rescue and hazardous material response vehicles that were in high demand during that time.

Today, the department’s special emphasis on readiness still applies to catastrophic situations as well as to all fire and rescue operations. This particular station is one of the busiest in the city, with consistently high call volumes.

Before Renovation, Originally Constructed in 1975 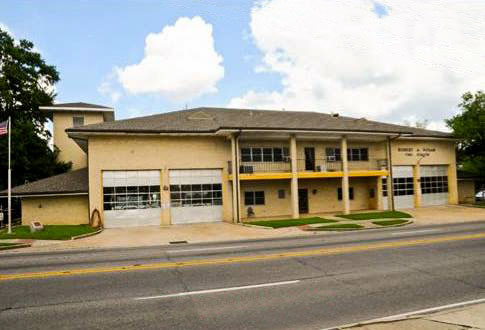 As the renovation was being planned, architectural firm Cress & Loprest gathered input from department officials. Among design parameters stated from the beginning was an interest in getting trucks out faster and giving crews better visibility of the door operation. They knew that with four-fold doors, drivers are able to exit confidently without concern for hitting the doors before they are completely open.

The previous sectional overhead doors were hard to see as they travel above the roof of the truck cab. Drivers had to spend precious extra time waiting to be sure the doors were clear. There was also occasional damage to the doors as well as the truck equipment when the truck’s ladders hit the doors.

With the new Slidetite 2.0 four-fold doors, it’s no mystery when the doors are open and trucks are good to go. Drivers can easily see the panels. The doors open in as little as 8 seconds, roughly twice as fast as overhead sectional door systems. With their unique guide bar and rollers, they are also quiet, never distracting from fire fighter communications within the truck bay.

Fast acting as well as quiet.

Architect Bill Cress notes that the station is one of many buildings being updated as part of the revitalization efforts in that part of the city. Many of the buildings date back to the 1800s and are being renovated with particular appreciation for that heritage. The doors’ custom burnt red color was specified by Cress to tie into the city’s historical color palette. 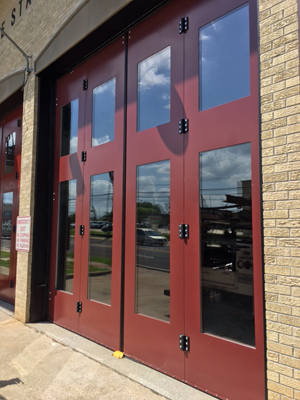 Fire Chief Ed Smith is also “very satisfied with the door appearance as well as performance.” The doors add an iconic architectural element to his department’s signature station, with unique vertical panels that complement the buildings new columns and other accents.

The station is named after Robert Bogen, a former fire chief who started his service there when the department was all-volunteer. In his tenure, he built the department to be one of the top rated career firefighter units in the country.

Installation of the four 14′ x 14′ doors was handled by Gulf Coast Dock & Door, Raynor’s dealer in Baton Rouge. The doors easily retrofit the existing openings without requiring any significant structural changes. Gulf Coast also provided and installed Raynor Steelform overhead sectional doors on the rear of the building where trucks return from each call.

Slidetite 2.0 doors can be specified in thicknesses from 1-5/8 in. to 4 in. including a 4 in. hurricane-rated door system. Opening widths can be accommodated up to 20 ft and heights to 33 ft  with 4-inch thick models.

Why do fire chiefs as well as architects prefer Slidetite 2.0 four-fold doors? Check out this other recent project.

Get updates on new blog posts in your inbox.