Speeding response times for fire fighters and paramedics stationed at the impressive new Oakville Station #3, fast-acting Slidetite 2.0 four-folding doors from Richards-Wilcox were among the first requirements expressed to the design/construction team as planning began on the new fire station and nearby arena renovation/expansion which also features Raynor coiling doors in the updated hockey arena.

One of the most significant architectural projects ever to take place in Oakville, Ontario, the entire complex is a greatly heralded example of thoughtful access planning and heritage commitment by the community, its architect, Diamond Schmitt, and contractor, Graham Construction.

The renovation transforms a site that has been a community hub for more than 60 years. The new fire station was a key element of the plan and sits on the corner of the property. It is designed to complement the architecture of a new addition to the arena, facing the street and doubling the size of the original building.

Deputy Fire Chief Andy Glynn notes that “We selected four-fold doors for the station primarily because they open faster than overhead doors. They go full-open within about 6-8 seconds, getting trucks out of the station and on to the emergency call.” For first responders, every second counts and can make all the difference in saving lives.

Also affecting speed of departure for emergency vehicles, Glynn mentions that it is easier for fire truck drivers to see when folding doors are open so trucks can make their exit confidently. The doors fold to the side, making it obvious when there is clearance to go. Ability to see the top of the door opening is restricted in fire trucks, he says. With conventional overhead doors, drivers have to wait cautiously, often several precious seconds longer, to be sure the door has completed its upward travel.

In addition to the advantage of quicker response times with the Slidetite 2.0 four-fold doors, Glynn expects the new folding doors to reduce maintenance costs otherwise involved should trucks hit the doors.

Diamond-Schmitt Architect Steve Culver said that “For the Trafalgar Park Project we were specifically impressed by the performance characteristics of Richards-Wilcox’s Slidetite 2.0 door system for the fire hall. These met the speed of operation requirements of the Oakville Fire Department, They were also a clean and modern feature on the building, differing from the glass panel roll-up doors typical of fires stations from the past.” 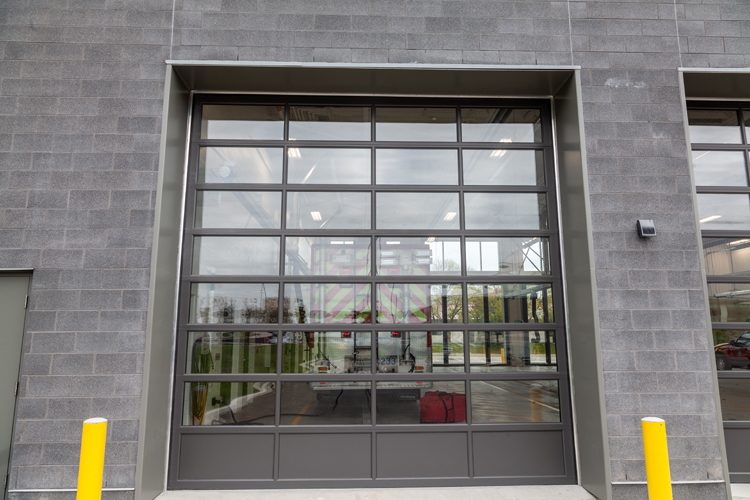 The new station does have conventional overhead doors on the back of the building. When trucks return, drivers can easily see the door opening action and also don’t have to pull in as quickly as when they leave for calls. RW insulated Alumatite™ doors were chosen for the four rear entrances. Just as for the front Slidetite 2.0 doors, they are a custom color per architect specs and also feature large full-view glass sections along with kickproof bottom panels for durability. 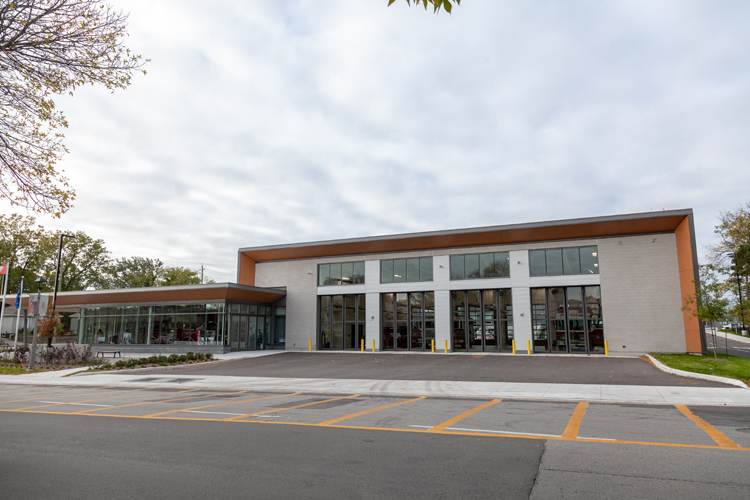 Another special feature of the new fire station is its Fire Education and Heritage Room. A destination for anyone interested in fire safety, the history of the Oakville department as well as fire fighting as a career, it incorporates a variety of interactive displays and historical artifacts. The front windows of the museum area are designed to tie in visually with the vertical styling of the Slidetite 2.0 doors.

Design Of The Hockey Arena and Community Center

When the project was first being considered, the Oakville community had many wish list items to challenge the architects and contractor. For example, the deteriorated facility had been used over the years for many types of events and also had a collection of other activity areas on the property such as a senior centre and surrounding park. 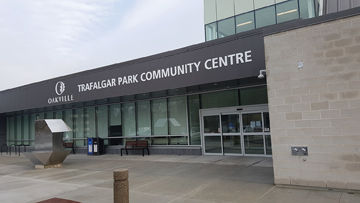 Attempting to address needs of the whole community, the new facility would ideally bring all of those activity areas into one cohesive plan.

Culver says “The most important design considerations were to sensitively update the arena and provide functional and beautiful spaces for the community centre. The challenges of providing a functional building meant that adjustments had to be made to the existing arena ice surface level. The new ice surface was raised in the arena to allow for modern accessibility standards and to minimize transitions within the whole complex.”

In particular, the project team was also charged with retaining the arena’s classic interior Hipel wood trusses. Designating the entire Trafalgar project as a heritage zone, the arena is one of only a few left in Canada with that framing system. The Diamond-Schmitt plan called for updating the envelope through re-cladding the building and maintaining the stature on the site. “We chose to contrast the vaulted massing of the arena with a simple, modern aesthetic for the (adjacent) community centre,” notes Culver. 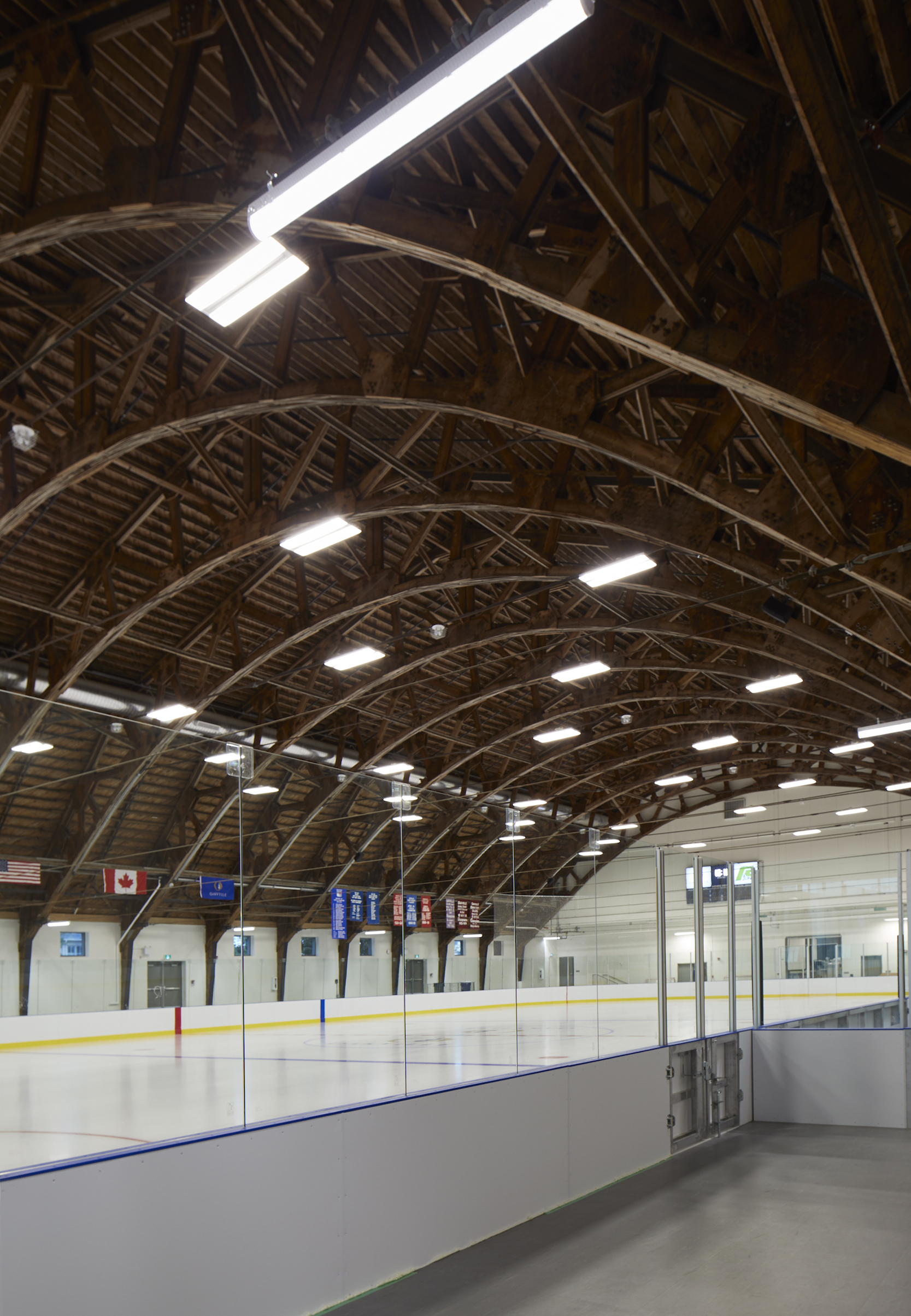 Neal Panchuk, Project Manager–Design for Graham Construction, reports that all of the community requirements and more were met in the final design. He noted that the overhead structure in the arena was renovated and saved, with a new roof built up and over the original wood framework, not depending solely on the trusses. The classic wood trusses are particularly unique in how the beams discourage buildup of condensation which otherwise tends to drip from trusses of other designs, affecting ice quality for hockey.

Within that arena, which expanded to NHL-size with added seating and other amenities, new Raynor FireCoil® and DuraCoil® doors provide access for Zamboni ice resurfacing machines. That portion of the building layout is completely new and is designed to withstand continuing heavy use of equipment traffic. 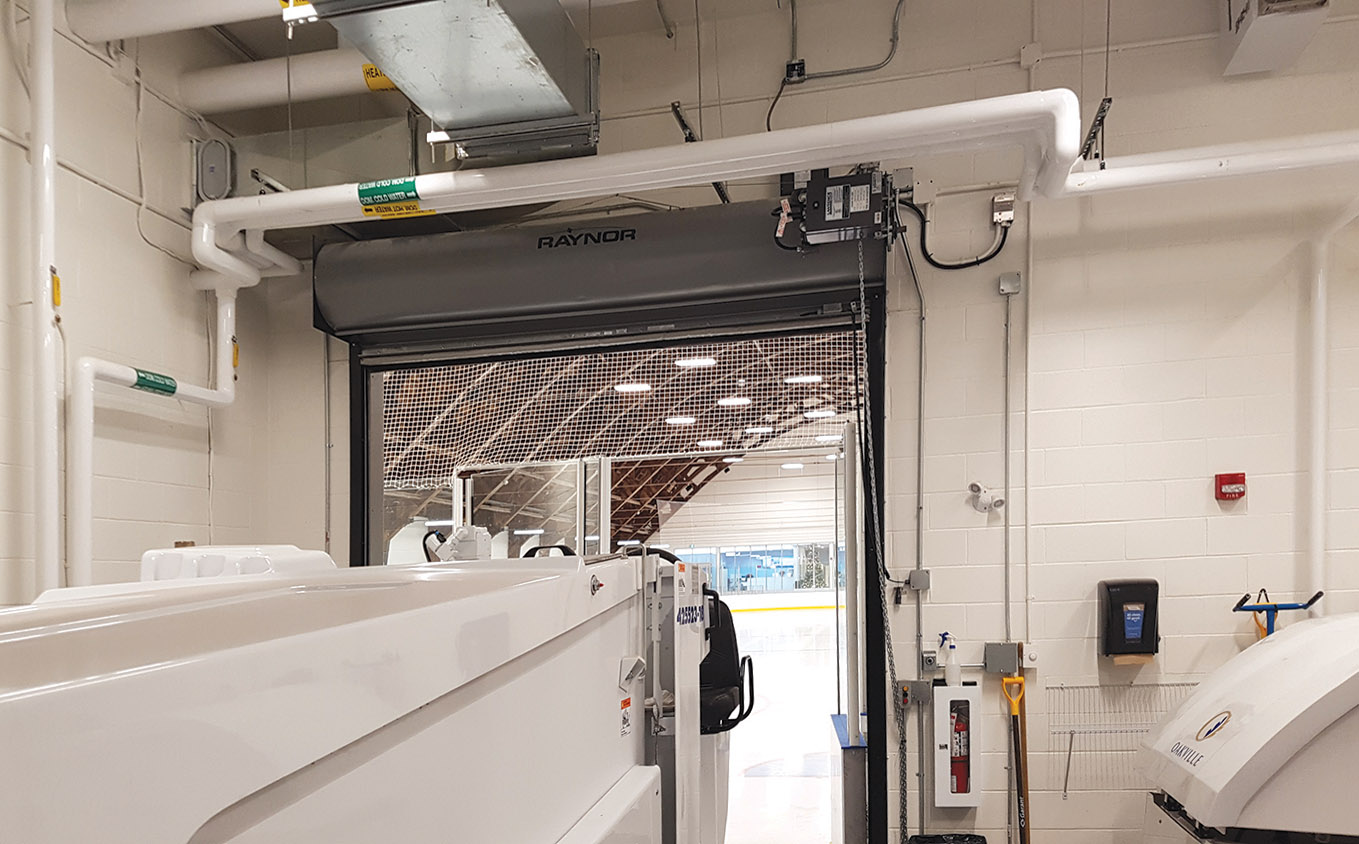 For fire safety, the FireCoil doors are designed to close automatically if temperatures inside the garage rise above 165°F or are otherwise triggered by smoke detectors, reducing chance of any fire spreading to the arena. 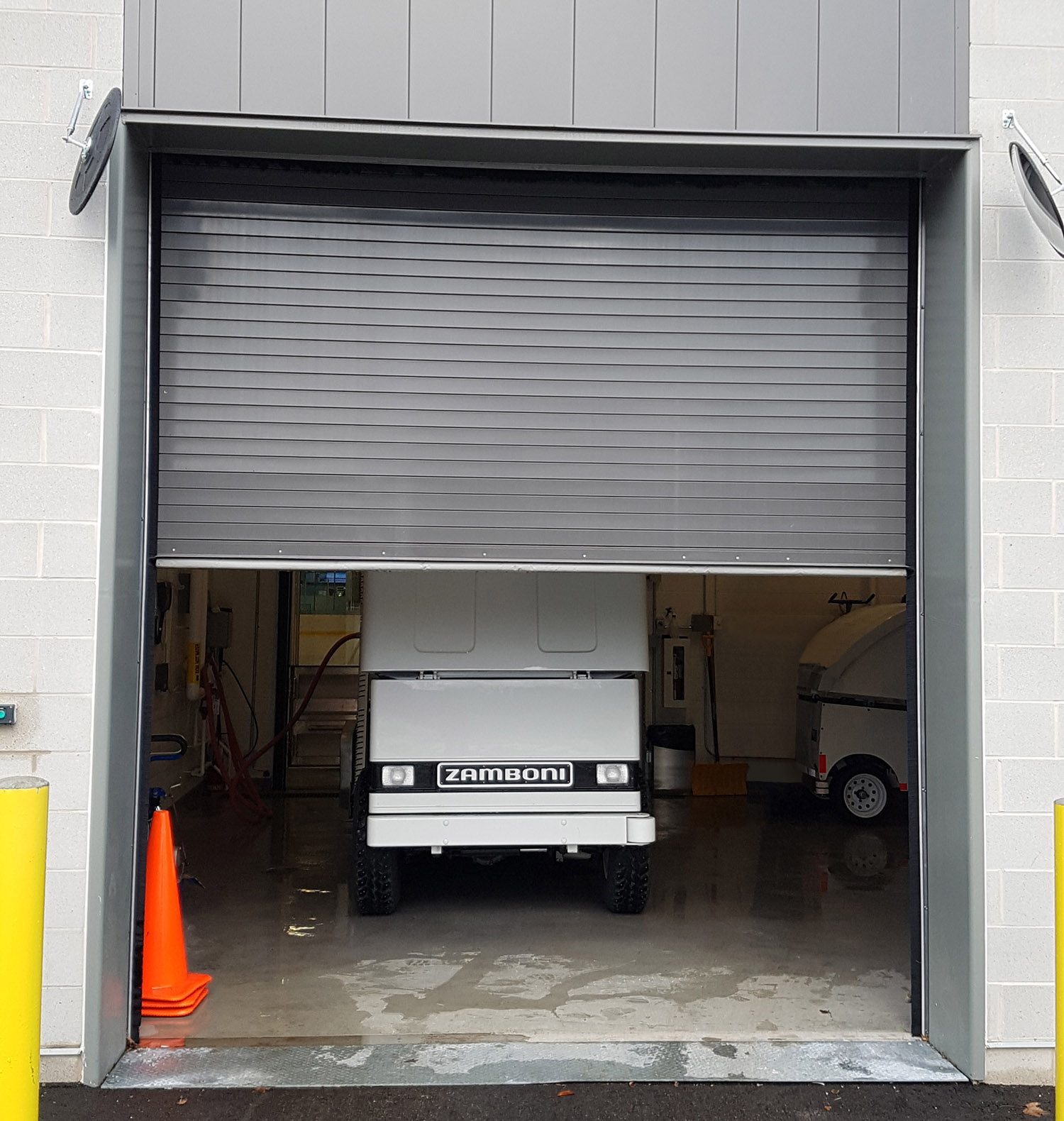 Delivery and installation of the RW and Raynor door systems was managed through the IPD (Ingtegrated Project Delivery) process, a design and construction platform that the community found to be a big plus in monitoring progress. It represented a departure from traditional approaches which normally begin with hiring the architect, then bringing in the contractor at the construction phase.

With IPD, both the architectural firm and contractor were collaborating from the beginning. Panchuk, who is an advocate for the IPD method, explains that it helps organize all phases and keeps everyone working together to schedule each step. The project came in on time and on budget. RW’s dealer in St. Mary’s, Easy Lift Doors, became a part of that IPD process, handling all aspects of door delivery and installation which Panchuk stated went very smoothly. “Their people were onsite quite often and were easy to work with,” says Panchuk. 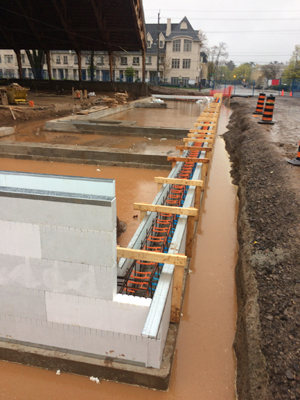 One particular challenge during the construction phase was weather. “There were 28 days of heavy rain during construction,” says Panchuk. “But everyone on the team pitched in and we were able to overcome the weather delays.”

The new complex celebrated its public grand opening in September 2018 and has once again become the center of Oakville community recreation and cultural activities. Having the latest fire station in the neighborhood is also a particular bonus, a source of pride and peace of mind for area residents.

Also, you might find this fire station project of particular interest for its building requirements. The renovation involved building around the original structure without disrupting service. Quite an accomplishment!

Get updates on new blog posts in your inbox.